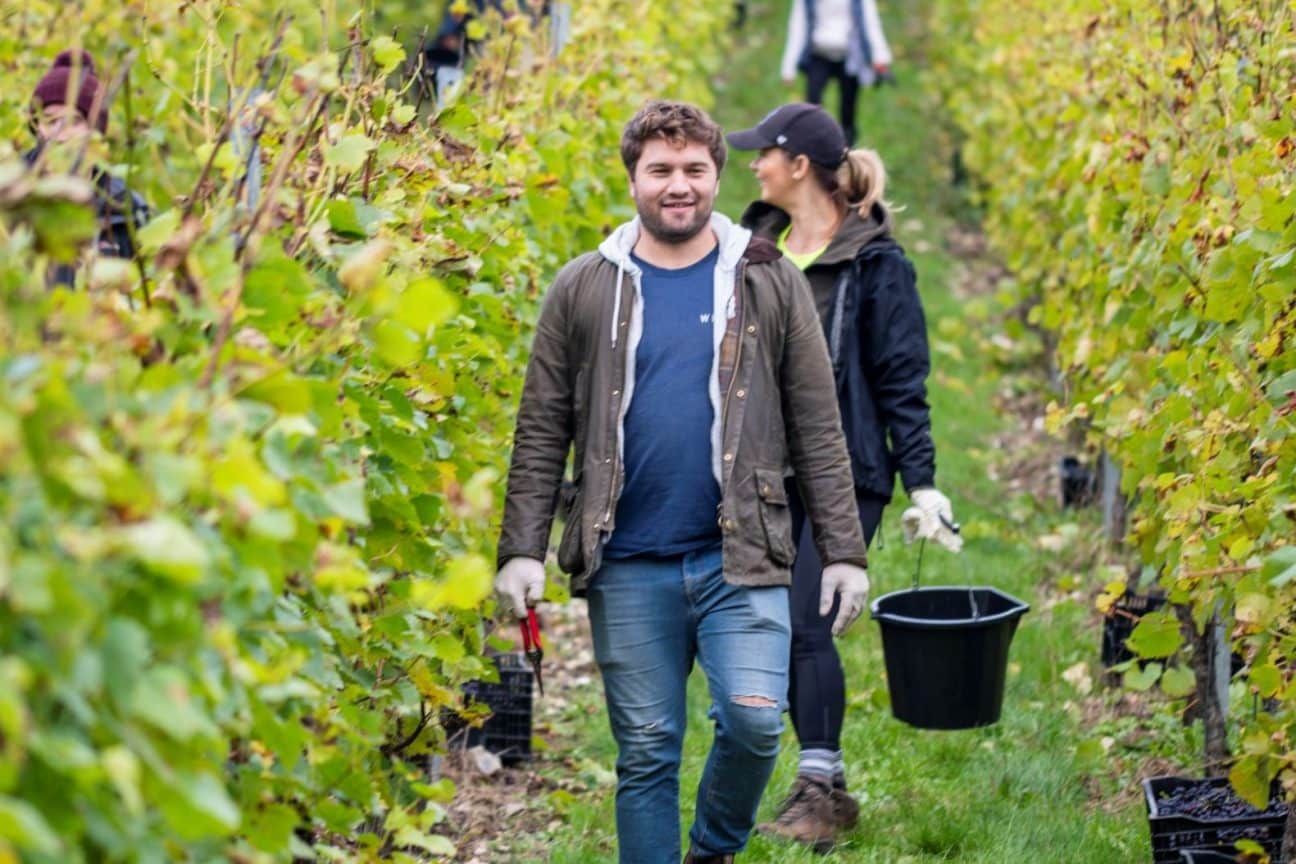 What a year! With the 2021 wines fermenting in their tanks and barrels, we look back at the conditions in the vineyards throughout the year, and how they shaped the harvest – the 15th growing season here at Wiston Estate. It was a year of significant challenges, with almost all the calendar months delivering extreme and unusual conditions in one way or another. The words ‘coldest, wettest, highest, lowest, dullest, driest, and warmest’ all seem to crop up frequently below, with the odd ‘heat wave’ and ‘flooding’ thrown in for good measure! Our Vineyard Manager James McLean shares his notes.

It started as it continued… colder and wetter than the norm! It was the coldest pruning season in 10 years, not to mention very wet too, with around 150% above the average rainfall in January. Fortunately the vines were in great shape thanks to a low yielding and early harvest in 2020, which allowed them to replenish their vital carbohydrate stores ready for the coming season. As a result we saw far less die back compared to the previous two years, with lots of spur and plenty of healthy canes options to choose from. This was a particular treat on what is traditionally a low vigour site, allowing us to reset and re-shape the vines preparing them for many seasons to come. This was followed by tying down to the wire in the distinctive Wiston arched form (pendlebogen). 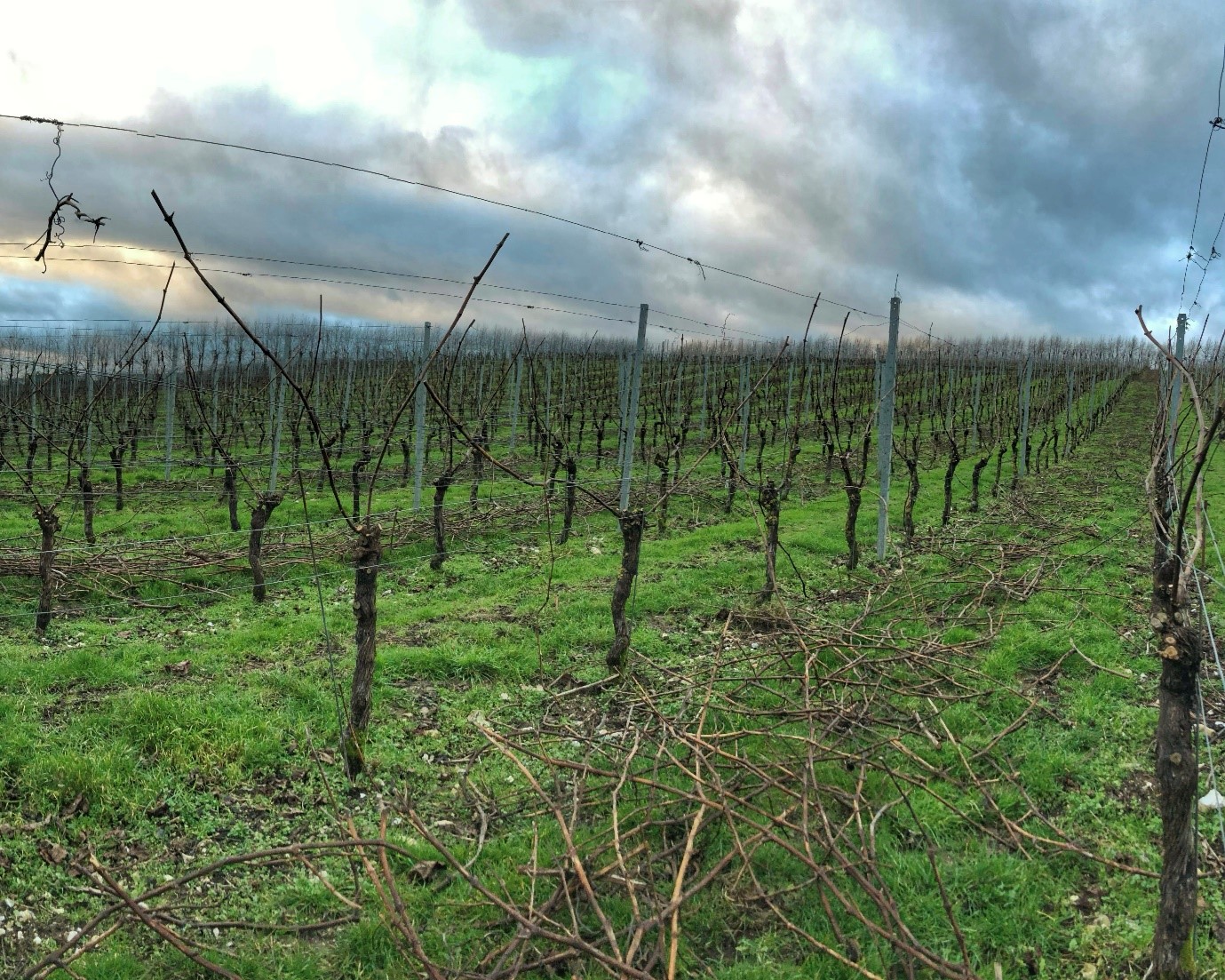 The actual growing season got off to a very late start due to exceptionally cold weather throughout April – we saw the highest level of air frost in 60 years; 14 days of air frost in the month topping the previous record of 11 days in 1970. This number of air frosts is more typical for December, January and February, the average count in April is normally five days. Due to the cold start budburst was delayed across the whole of Britain pushing it right back to the last week of April / beginning of May. Sadly for many areas of Europe they had already seen widespread bud burst and therefore suffered significant frost damage, reported all the way down to the south of France and central Italy. 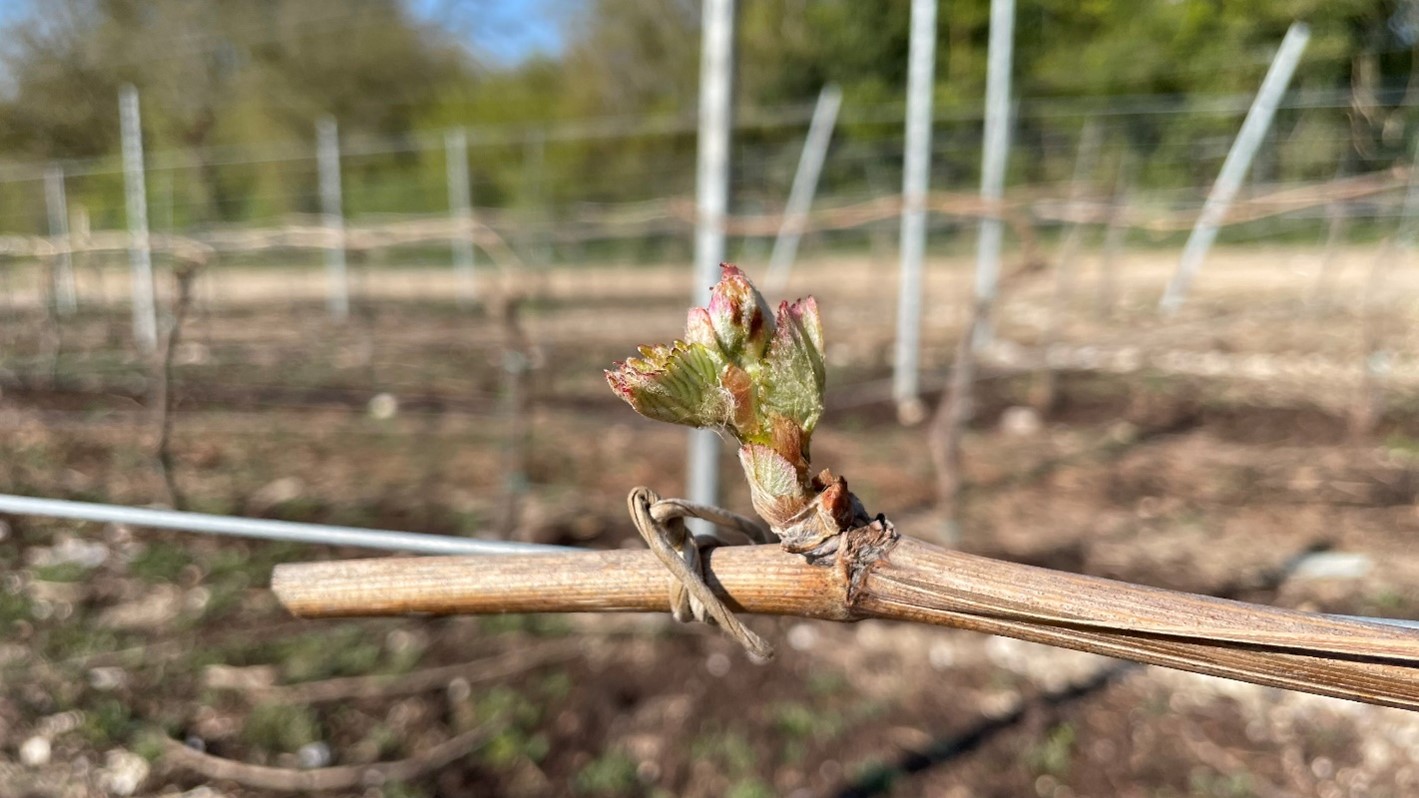 In May the vines really began to wake up, but the conditions remained challenging as we endured England’s fifth wettest May on record – the wettest since 1967, with 111mm of rain. With the rain also came extremely high winds gusting up to 50/60mph on the 20th/21st. This did cause some alarming damage and slowed the vines down further, leaving leaves looking as though they had been frost bitten. Luckily the inflorescence/flowers were still tucked away and safe from the harsh conditions, preserving the fruiting potential of the shoots. 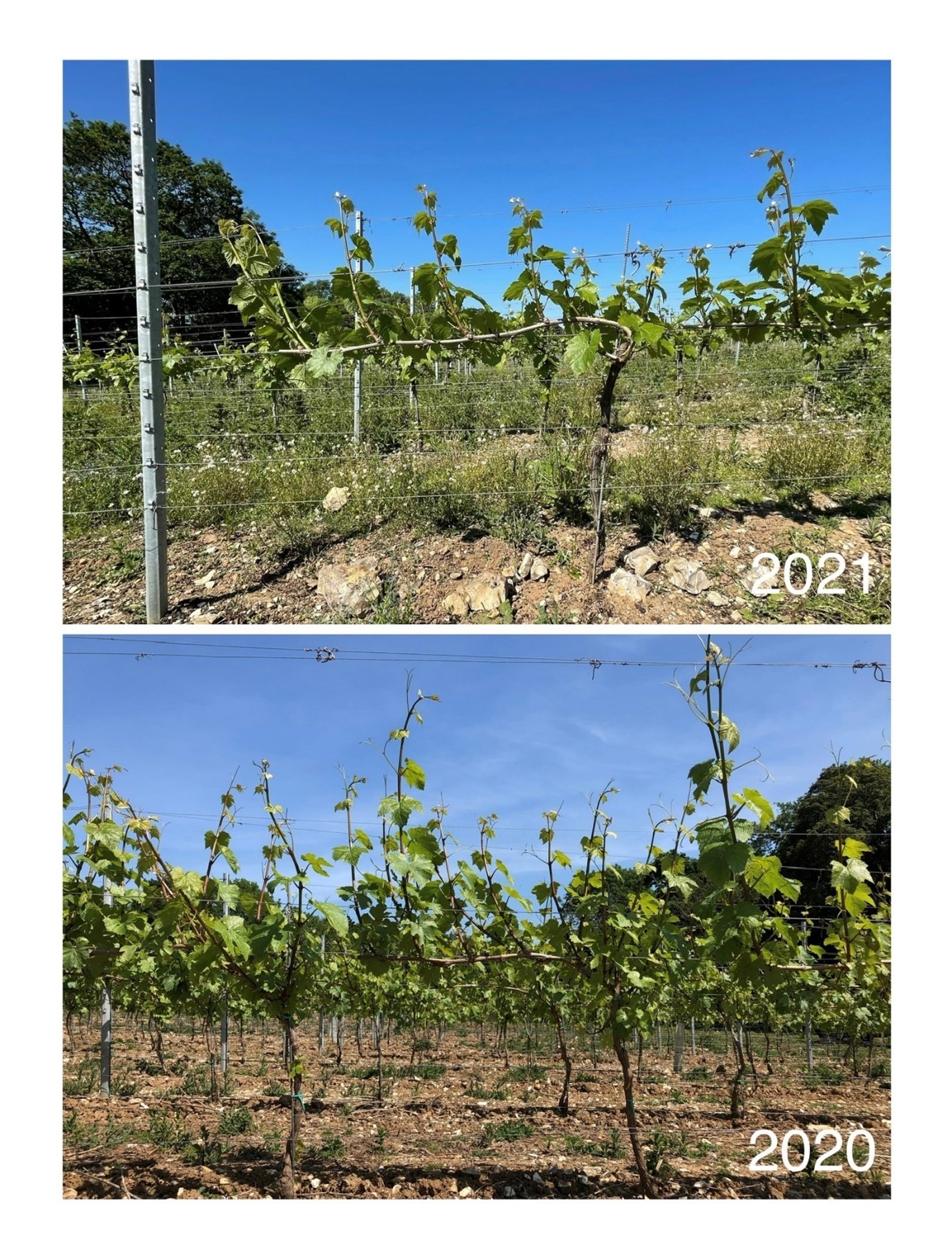 By June we could begin to make some comparisons to previous years and make our first predictions as to potential crop yield and harvest dates. The photos here were taken at the same time (beginning of June) show quite a stark difference between the two years, illustrating the vintage variation that English wines are famous for. At this stage in the season, we were around three weeks behind 2020 and two weeks behind the long term average. June was a tale of two halves, beginning with warm, dry weather, with particularly warm night time temperatures. However the second half of the month was far less settled with consecutive stormy weather fronts moving in. The south of England saw double the expected rainfall for the month condensed into two weeks. Most people will remember July 2021 for the heatwave during the middle of the month, which saw the Met Office issue its first ever extreme heat warning. Northern Ireland even broke its all-time temperature record with a figure of 31.3°C. This weather front coincided perfectly with flowering in the vineyard, one of the most important times in the yearly vine cycle. Providing the vines with the ideal conditions to set the crop for harvest. The only hiccup was a small outbreak of botrytis during flowering, threatening the soft exposed flowering tissue which, if left untreated, could infect the undeveloped berries and re-emerge at harvest causing wide scale crop loss. The heatwave, and obsessive vineyard management to bring this outbreak back under control, proved crucial at the end of the season.

August (like much of 2021) was another month of lows, giving it the dubious title of England’s 7th dullest August on record! Maximum temperatures were 1.5 °C below average and sunshine was widely below average – with less than 60% in some places. The rain and cool, dull conditions had by this point began to take its toll on the vines. By the end of August we began to see the tell-tale signs of downy mildew on the young leaves in the top portion of the canopy. Thanks to carefully distributed preventative sprays the fruit was kept extremely clean.

September finally began to deliver something of a summer with temperatures climbing, making this the equal third warmest September on record. The south-east was largely dry with sunshine hours slightly up on average. This weather FINALLY allowed the vines to catch up and the fruit began its final push, véraison (berry colour change) hitting right in the middle of the month around two weeks behind 2020. After a positive and hope-restoring September, October returned to 2021 form with the first part of the month seeing heavy rains resulting in flooding around many parts of the south-east. The chalky South Downs slopes of our vineyard really came into their own allowing all the excess water to quickly drain away. 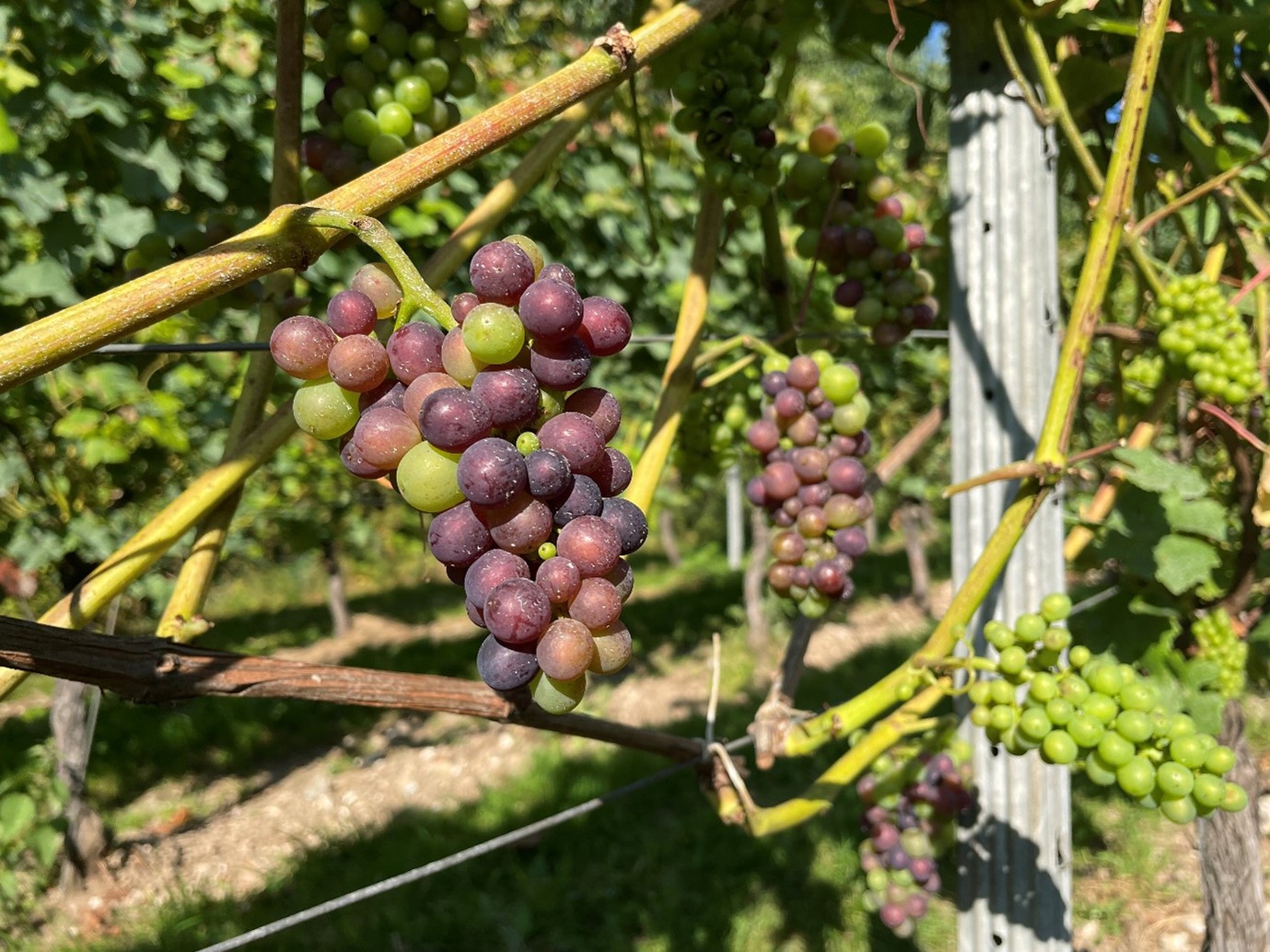 Slowly but surely the sugars in the grapes did accumulate while the acids began to drop, the colours grew ever darker and harvest finally seemed to be on the horizon. Harvest finally begun with the pinot noir on the 19th of October with a break in the rains, a full two weeks behind 2020. The Chardonnay was picked a week later, starting on the 25th. The weather had been a massive challenge all year, but not the only one it turned out. Due to a major issue with our normal contract picking teams, we were left without grape pickers mere moments before the harvest.

The call for help went out to the local and wider community. Amazingly a great team of locals (and not so locals!) signed up to give up their time to come and help us pick. The volunteers were central to helping us to bring the fruit in at the optimum time and in great condition. The rallying call ‘more crates’ could be heard echoing around the vineyard. All this hard work meant that the winery had pristine fruit delivered to press to make Wiston’s award winning wines. 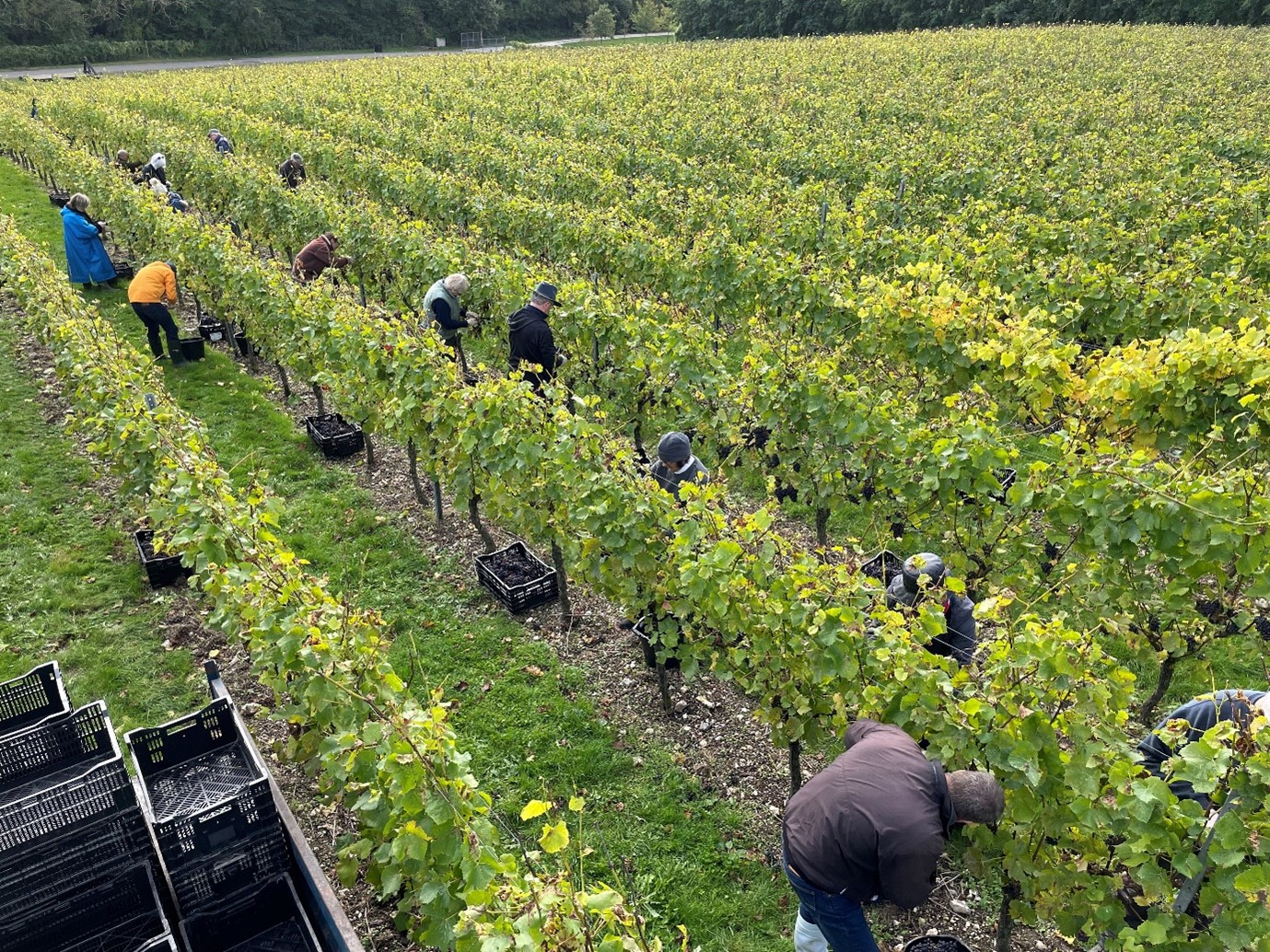 The highlight of the harvest was definitely the pinot noir vines at North Farm – which visitors will drive through soon as they visit once Chalk is open. It not only came off clean with amazing colour intensity and sugar, but also (thanks to the whole estate team who picked it), the team picked over double the estimate, nearly seven tons rather than the predicted three! 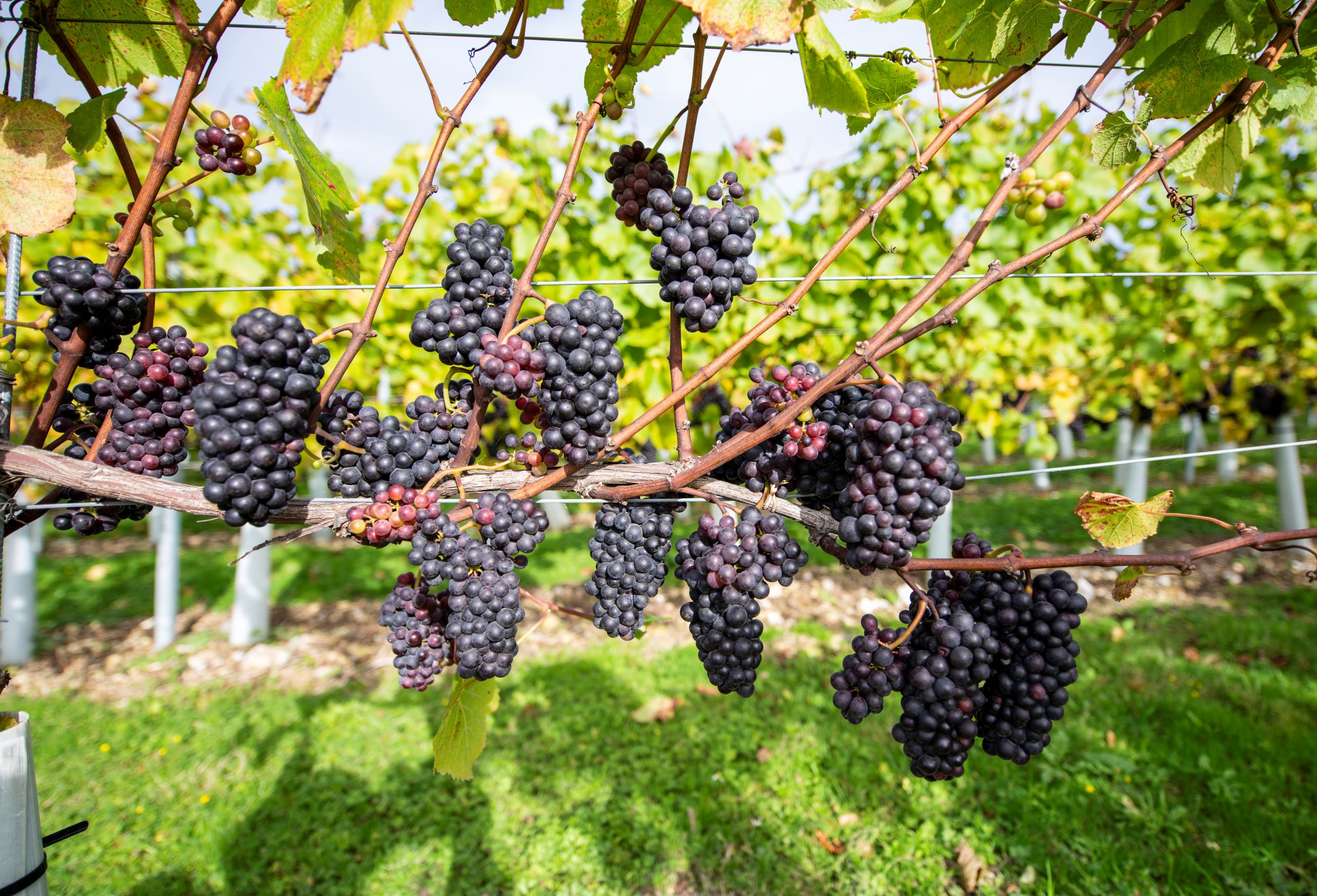 The energy and enthusiasm from the volunteers and estate teams was infectious and really helped to push everyone through what was a long and tiring harvest. It concluded on the very last day of the month in what was fittingly a very wet and cold morning. Given all the challenges of the year, we are really pleased with the results – a monumental effort from all, especially the volunteers who gave up their time to see the harvest brought in safe and sound. 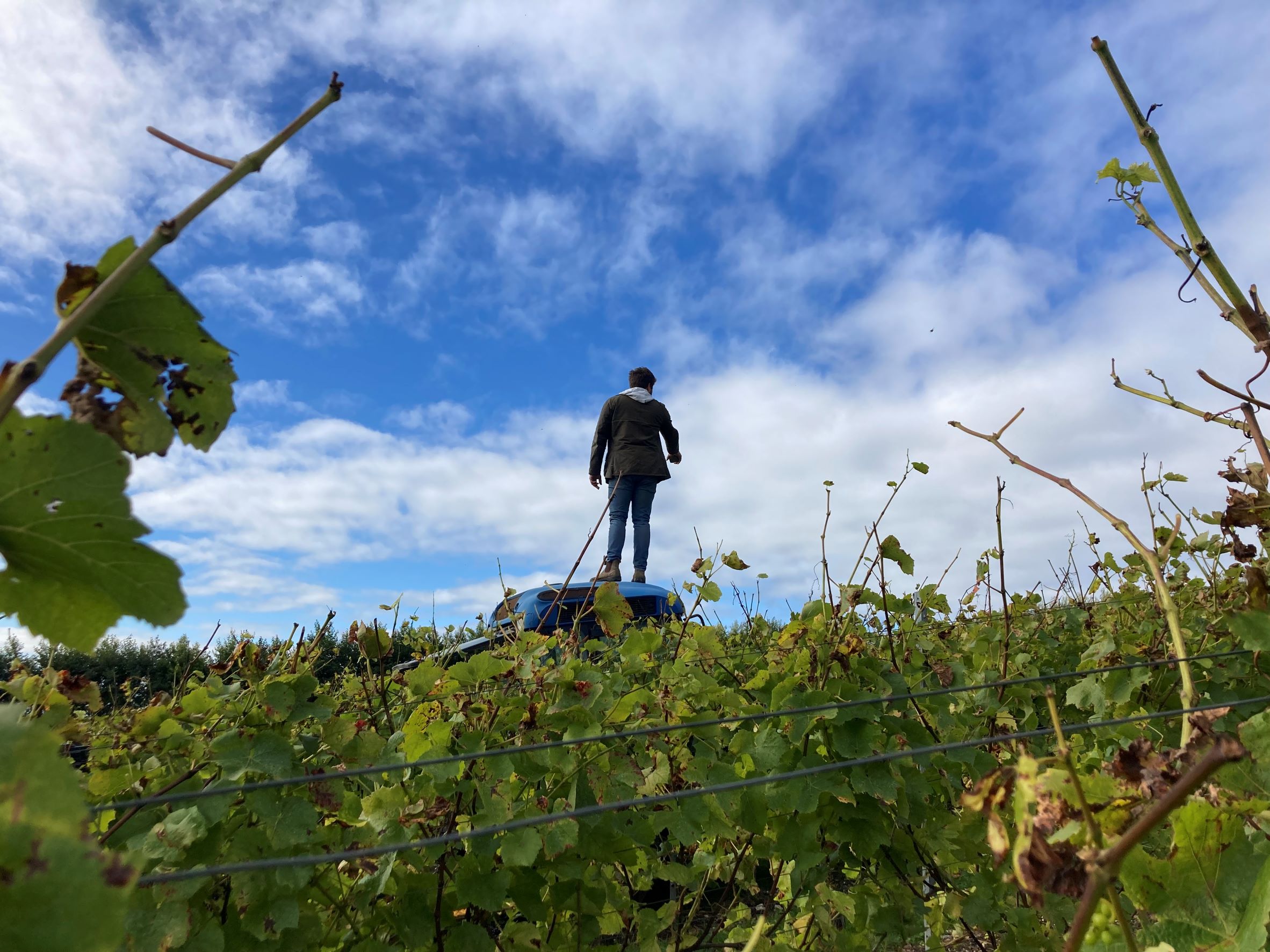 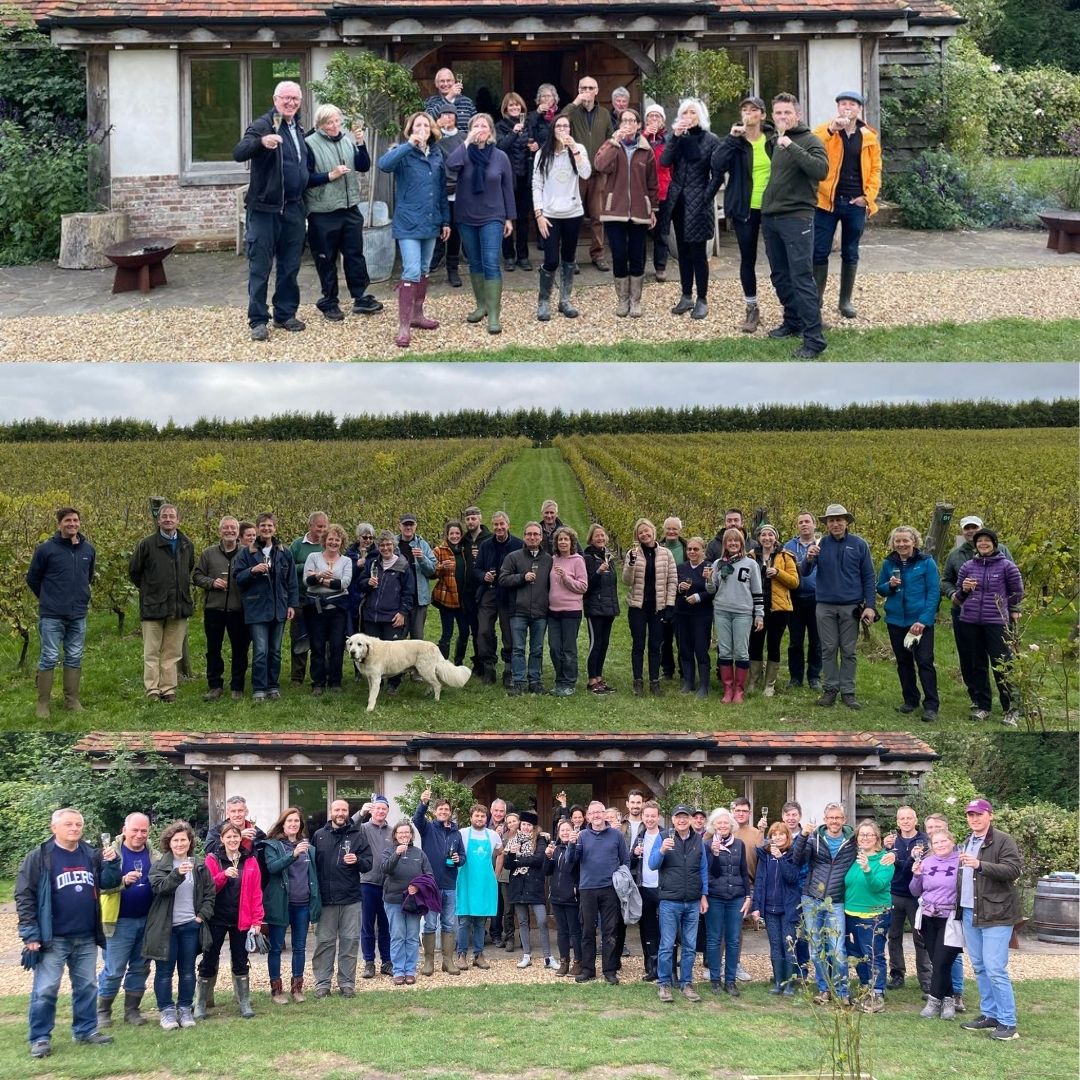 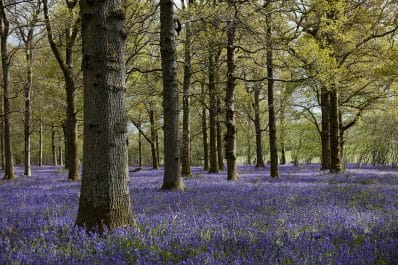 Bluebell season is upon us!

Wiston Estate is home to 22km of footpaths and 35km, and some of these wind 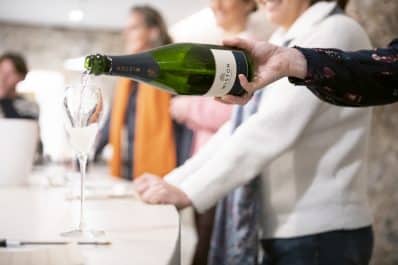 What’s on at the Estate… 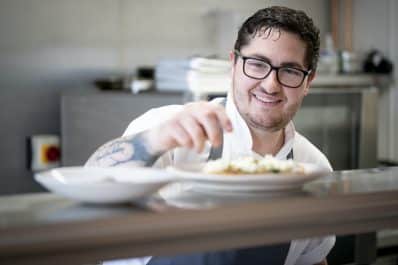