Pasture-fed beef, reared on the estate

The family-run Danefold Farms are one of our suppliers at Chalk Restaurant, supplying the delicious beef which the chefs serve up on our lunch menu. They focus on regenerative farming. This method is the most ethical way to rear beef, allowing the herd to roam natural pasture, moving between different grasslands and under trees, which in turn has a positive impact on local biodiversity. Danefold’s rare breed White Park cattle are native to the British Isles and they are the only cattle breed in existence today which is effectively ‘un-bred’ – and look the same today as they would have done 2000 years ago. Once found all over the UK, they were domesticated after Roman times and were hunted in Medieval times in enclosed forests for sport. In more recent history they were so highly valued by Winston Churchill that he sent a small herd to America during the Second World War, to preserve them in case of disaster in Europe.

Sadly they have since declined – being deemed ‘uncommercial’ because the calves take ‘too long’ to be raised for meat – three to three and a half years. In the 1970s only 60 breeding pairs remained in the British Isles. Luckily a few key farms determined to preserve this rare breed still farm them today. Danefold Farms graze their White Park cattle on the pastures at Wiston Estate. They enjoy views of Chanctonbury Ring and the South Downs, and are 100% pasture fed. Not only is this a good environment for the cows to live in, it benefits the landscape as well. The herds are rotated around different fields – allowing the fields to ‘recover’ after being grazed. The cows help different varieties of grasses to survive and this in turn helps promote the biodiversity which can thrive in these downlands. The action of the trampling of cows’ hooves agitates the soil, releasing and encouraging seeds to germinate and new plants to flourish. 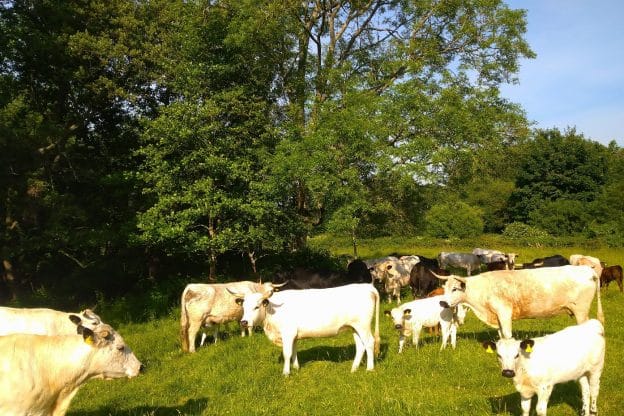 The cows spend their lives in an area of around 10 square miles and have to go through very limited travel. This means they have very low ‘food miles’ as well as less stress for the animals themselves. It is wonderful to be able to serve this meat at Chalk, knowing the cows have grazed the area around us in a stress free environment and are certified pasture fed.*

*For meat to be labelled ‘Grass Fed’ the requirement is that the animals are minimum 49% grass fed. White Park cattle are 100% pasture fed.